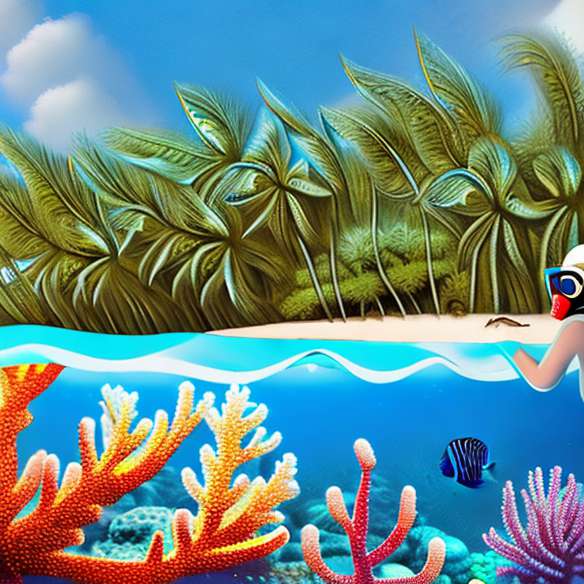 Native of Reunion, Pascale Chabanet has always had a privileged relationship with the sea. However, she only discovered diving as an adult, after years in the metropolis until she obtained, at the University of Aix-Marseille, her DEA "Marine environment". His thesis supervisor then proposes to study the reef fish stocks of St-Gilles / La Saline, on ... the island of Reunion! "I spent my diving levels on this occasion," she recalls.

Count the fish
First step of a study of this type? We must count the fish! Pascale Chabanet smiles at my incredibility: "it's not so difficult, in fact the fish are pretty sedentary." Scientists crisscross a given area according to the species studied and their behavior, then write down on a plate all that they see, in making several passes. They also observe the size of the fish encountered: "In case of overfishing, they are generally smaller," she says.
Specialized in the study of human impacts on corals and associated fish, Pascale Chabanet can then use this data to challenge governments. She is currently working with New Caledonian mines: "A nickel mine is planned in the north of the island, which will have an impact on the environment.
scientist to measure this impact. "

Select sites
Can the installation of this mine affect the inscription of New Caledonia's coral reef on the heritage of humanity? No, because the entire barrier is not affected by this listing, and areas with mining projects are automatically excluded.
After numerous studies, six zones will be proposed to UNESCO in January 2007 (15,000 km2 out of the 24,000 that count the lagoon), these meeting the four criteria of the rare natural sites corraliens registered with the inheritance of humanity ( most of the more than 700 listed sites are cultural sites, such as Pont du Gard or Mont Saint-Michel in France):
1- A natural beauty.
2- An exceptional biodiversity (15,000 species have been recorded) accompanied by a variety of important reefs (fringing reefs, double barrier, atolls and oceanic reefs).
3- Multiple habitat types (coral reefs, mangroves, seagrass beds - plants that produce oxygen - and bedrock).
4- A representation of the main stages of the history of life (from primary to quaternary).

Pass on to future generations

Other cap that gladly takes Pascale Chabanet, that of pedagogue: "It is important for me to train children and young people to the protection of the New Caledonian coral reef." In schools or as an animator of the IRD youth club in Nouméa, she teaches children that coral is an animal ("it's not a pebble"), so do not step on it and feed the fish. His message is clear: "You have a treasure that will be seen by the whole world, it must be passed on as it is to future generations."
We will know at the beginning of 2008 if UNESCO will have heard it ...