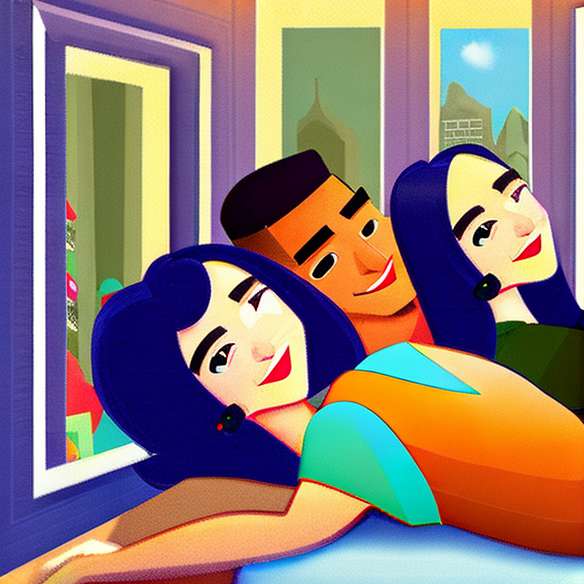 Your beautiful love story has just ended. It is then that a kind of collective hysteria seizes your close friends who imagine that you are languishing in a deep disarray. Result: they begin to introduce you a whole lot of boys.

Pauline: "go out with the first comer, no thanks!"
"My old friend lived with a certain Carlo, who lived with his cousin Tony.
When I went to see them at home, Tony was always with us. He was nice, but hey, not at all my style. A little heavy. In fact, it was not so much that I spent weeks realizing what was going on: My friend Fabienne and Carlo wanted to fuck me with Tony. When I understood that, I continued to see Fabienne but I managed not to see her at home, but in public places. When one day, she arrived with the Tony in question at the bar where I had made an appointment. There, I cracked: I told him plainly that nothing would ever happen between him and him, he had to stop getting stuck all the time.
Not only did I lose a suitor, but also a friend. In fact, it's very pretentious, but to think that Fabienne can imagine me with such a common type hurt me a lot. Especially that certainly, I was singlebut from there to go out with the first one who wanted me, it was not necessary to exaggerate! "

Celine: "My grandfather plays the matchmakers!"
"In my family, it is fashionable to get married at the age of 25 at the latest, or you will be considered a complete old maid.I am 22 years old at the time, a boyfriend from time to time, whom I do not feel obligated to present to my family, in short, a normal life as a girl of my age One day my grandfather telephoned me and said: "my darling, I arranged a meeting with Arnaud du He is a polytechnician, a boy really very good. He promised to take you to the ball Polytechnic, you'll see he's charming. Call him, he's waiting for your call ... "Shame ... I had not asked for anything!
Resigned and embarrassed, I called the boy to explain that I was sorry. "I'm sorry, it's an idea of ​​my grandfather!" For his part, he was very nice, very courteous and I felt he was forced "in fact I do not really dance ..." "Me neither!" ... In short we agreed not to see us. I found this story quite humiliating. "

Marianne: "First prize of raffle"
"During a winter sports trip, I sympathized with a certain Annabelle, and before we left, we exchanged our contact details.
Less than a year later, she calls me to announce that she is getting married in Nantes in a few days and that she would be very happy to come. I'm surprised because we're not very close, but I'm flattered, and as I'm on vacation next door, I say yes.
During the cocktail, when I do not know anyone, lots of boys come to me, dredge me more or less subtly. When I sit down to eat, I realize that I'm at the wedding table (which seems incongruous), between two singles male sex. Thirty well typed, nice but not very funny, (or even sinister for one of them), they have obviously already heard about me ... In short, I realize that Annabelle, this "girlfriend", spoke from me to all his friends singles a little boring and invited me in the hope that I like one of them ... All evening, I got glued by the most boring!
A few months later, I let Annabelle know that I did not like being invited to be the first prize of a raffle! "

Charlotte: "I'm not a social worker!"
"About 5 years ago, when I was having a hard time getting out of a love story that had destroyed me, some friends decided to introduce me to single of their surroundings. Without warning me of course. One evening, my sister said to me: "We are going to have dinner with the whole band and especially make you pretty." Weird, weird! We enter the restaurant and there I discover my band of friends and I see a man I do not know. I immediately felt the trap and it pissed me off.In addition they placed it in front of me, subtle! I was odious limit all evening. I found him old and ugly. The next day, I did not hesitate to say what I thought about my friends.
A year later, I saw him at a dinner, and there, surprise! The evening was very pleasant, it made me laugh ... Two days later he invited me to the restaurant, then we went out together.
Except that I quickly disillusioned, my first impression was the good one ... After three weeks his true nature came out: embittered, domesticated, critical about everything ... I called one of my friends to talk about it , to know if he was still like that. And there, she dared to admit that yes, it was boring, even unbearable and that in fact they had thought to introduce me, hoping that my contact it would change. I got angry and told her that I was not a social worker and that I did not have to waste time with guys like Dr. Jekyl and Mister Hyde! "

Jerome: "The arranged dates, it cuts me!"
"To be 31 years old and to be single ...Where is the problem ? Nowhere, because I loudly claim not to want to hire me for the moment. Most of my entourage do not encourage me in my choice and think only of one thing: to fit me!
In the middle of one of these matchmaker's dinners, the couple I was invited to go for a walk in the kitchen. By the way they will stay there for half an hour at the very least. The longest half hour of my life.
Because I found myself head to head with a girl, charming for the rest, but that did not really attract me. And here is the drama. After a long silence, I still ventured to ask a question that resulted in a cryptic answer. In 5 minutes, I had exhausted all my stock of conversation, since in front I was entitled only to the answers of the type "yes", "no", "I do not know". And there, what became even more embarrassing is when I was entitled to an answer of more than 3 words, I did not listen because I was thinking about what new subject to chain. All this interspersed long heavy silences for her and me ... My friends ended up returning with a smile asking if everything was going well ....
I left quickly after the coffee, leaving my poor pretender one night in a taxi. What's funny is that I saw this person well after, always at the same couple of friends, but without pounding and with other guests. Without a sword of Damocles, we got along well. "